STRAY & DICTATORSHIPS CAPITALISM IN LATIN AMERICA IN RESPONSE TO PROGRESS OF THE LEFT. BY FABIAN MASSA. 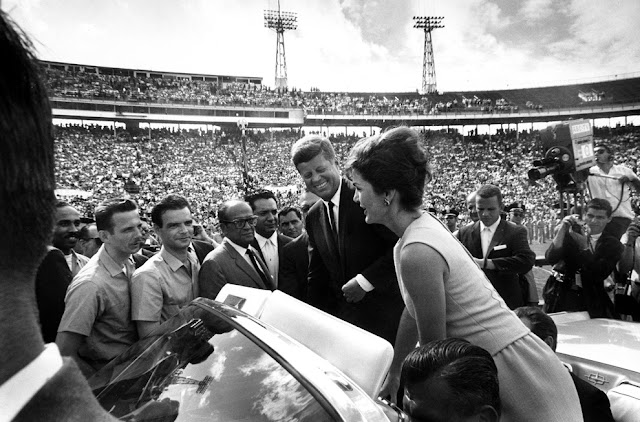 STRAY & DICTATORSHIPS CAPITALISM IN LATIN AMERICA IN RESPONSE TO PROGRESS OF THE LEFT. BY FABIAN MASSA.

Miguez Bonino explained Faces of Latin American Protestantism (page 26) that the crisis of '29 [1] had devastating effects on all aspects of life in Latin America. The recession pushed farmers to seek jobs in big cities and industrial centers, leave the field empty without food production, which fed back misery and scarcity.

Social protests, unemployment, poverty and hunger opened the door to the left parties. The response of the political system of the governments of Latin American countries was populism (eg Peronism in Argentina).

The Cuban Revolution of '59 marks a before and after comparison to the US attitude loe regarding this situation. In 1961 he born the Alliance for Progress [2] (English: Alliance for Progress), was a program of economic aid, political and social EE. UU. Latin America performed between 1961 and 1970. He was a proposal by President John F. Kennedy, for Latin America. The Alliance for Progress would last 10 years. an investment of 20,000 million was projected. Their sources would be US through their aid agencies, multilateral financial agencies (IADB) and the private sector channeled through the Pan American Development Foundation.


The aim was to "improve the lives of all inhabitants of the continent." In addition, it had the following specific objectives:


Social measures (education, health, housing ...), proclaimed policy (advocating the formation of democratic systems, according to the principle of self-determination) and economic (limiting inflation, improved balance of payments, always under private initiative). To ensure these objectives, the United States agreed to cooperate on technical and financial aspects. Cuba objected to signing the final agreement letter.

The Cuban Revolution of '59 (which marked the landing of the communist model of U.R.R.S. in America) was perceived by the US as a threat to its internal security and a source of "pollution" for Latin America, whose structural weakness and strong social differences was a theater that could easily fall into communism. Progress Alliance was created as a way to counter the influence of the rest of Latin American countries and support more reform measures. Such was the model USA presidents looked like Victor Paz Estenssoro (1960-1964 Bolivia), Romulo Betancourt (Venezuela 1959-1964), Janio Quadros (Brazil 1961), Arturo Frondizi (Argentina 1958-1962), Francisco Orlich Bolmarcich (Costa Rica from 1962 to 1966) Fernando Belaunde Terry (Peru 1963-1968), Eduardo Frei Montalva (Chile 1964-1970), Alberto Lleras Camargo (Colombia 1958-1962) and Guillermo Leon Valencia Muñoz (Colombia 1962-1966).

The main measures were; agrarian reform based on improving agricultural free trade productivity among Latin American countries, modernization of the communications infrastructure, reform tax systems, access to housing, improving sanitary conditions in order to raise life expectancy , improved access to education including the eradication of illiteracy, stable prices within the control of inflation and monetary cooperation.
The public enthusiastically welcomed the statement of the Alliance for Progress, but the program failed because, after the assassination of Kennedy, his successors limited US financial aid to Latin America, preferring bilateral agreements which prevailed military cooperation .

From the '70s to the failure of the program of the Alliance for Progress, which seen from our time seems to have been the plan was replaced by a policy of support and even incentives, US the military dictatorships that occurred in Latin America. The B [3] PLAN involved the militarization of the region to annihilate the possible sources of "infection Left" on the continent.

In December 1931, General Maximiliano Hernandez Martinez president of El Salvador, after the overthrow of civil ruler, Arturo Araujo. With the general Martinez a succession of military governments that would govern the country until 1979. favored the concentration of land in few hands and the enormous social inequalities generated a peasant and indigenous uprising in 1932, which was brutally suppressed, with nearly started 20,000 dead. Martinez's regime then consolidated to contain the rebellion, remaining in power until 1944.


The vast majority of these criminals were trained at the US Army School of America and its cruel mandates unconditionally supported by the US.

STRAY & DICTATORSHIPS CAPITALISM IN LATIN AMERICA IN RESPONSE TO PROGRESS OF THE LEFT. BY FABIAN MASSA. Latin theology Handout 5.

[1] In the US known as The Great Depression, which began in that country with a fatal fall Stock Exchange on Tuesday 29 October 1929 a crisis that spread quickly worldwide, extending until shortly before the 2nd World War was generated and in a way it was a trigger for it, since the difficulties that Germany lived from 1930 to 1939 favored the rise of National Socialism of Adolf Hitler.
[2] https://es.wikipedia.org/wiki/Alianza_para_el_Progreso
[3] http://forzablood.blogspot.com.ar/2011/01/una-larga-lista-de-dictadores-en.html
STRAY & DICTATORSHIPS CAPITALISM IN LATIN AMERICA IN RESPONSE TO PROGRESS OF THE LEFT. BY FABIAN MASSA. Latin theology Handout 5.