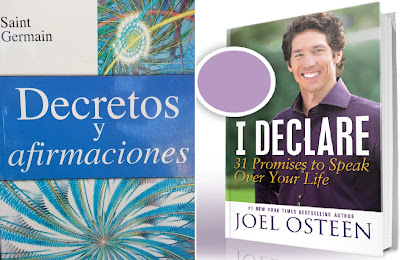 In this opportunity I present a study of CHRISTIAN METAPHYSICS of Catholic.net [1] and how it takes place Neo Pentecostalism, own Mega Churches.


1. THE DECREES IN "CHRISTIAN METAPHYSICS"

One of the pillars of metaphysics is the principle of mentalism, that the origin of everything is the mind, and that every thought that arises, will have a manifestation in the world of form, sooner or later. It is the belief that the mind creates the reality of one, that is, the way one thinks positively or negatively - affects the inner world of feelings and the external world: relationships with others and even material things And events in the world. This is what attracts many people to metaphysics because they realize that they apparently could not influence to improve the world by the positive of their feelings and will. All diseases, economic problems, anguish, etc. They are the product of their negative mentality. According to metaphysics it is a mistake to believe that we are sinners when in truth we emanate from the "impersonal Mind" of God. Being the principle of goodness, the god of metaphysics is not interested in judging us but in giving us all that is good. We can understand our goodness when we recognize that in our true nature we are part of God.

The way in which the practitioners of this sect are handled, is by Decrees or Declarations, through them assume a "Positive" position towards their environment and life in general. In this way they "impact" on the natural, modifying (according to them) the circumstances. The statements or decrees are a projection of their meditations and visualizations, the so-called "Positive Thinking", hence the saying "Everything is mind, thought creates reality."

2. THE DECREES IN "THE CHURCH OF THE UNGIDO"

For the pseudo-Christians who are in Neo-Pentecostalism, the natural reality can also be modified by means of the "Declarations of Power". The difference with Metaphysicians is that instead of creating their own "Declarations" they take verses or part of biblical verses (obviously the part that serves their obscure purposes) and manipulate them (out of context) as a Magical Prayer, as if Was an "Abracadabra". Likewise, positive statements (even denying reality) originate from the same principle: Project a "Positive" thought to modify the natural reality "Supernaturally with the power of your mind," no matter what the Will of God .

3. THE TEACHER ASCENDED IN METAPHYSICS

Conny says that the Age of Aquarius began in 1954. And from this time a new Master communicates with us: Saint Germain. He replaces Jesus Christ who was the "teacher" for the age of Christianity. Jesus was the "Christ" of the age of Pisces (the fish is a symbol of who identified with Yahweh's "I Am" in Ex 3,14, now is Saint Germain, he is our "savior" who will deliver us, not By means of his blood shed on a cross, but by means of the "Violet Flame." He is going to ascend to the planet Venus.

4. THE SHEPHERD ASCENDED TO "UNGED"

Metaphysicians replaced Christ with Saint Germain. Pseudo-Christians (who, according to them, are "true disciples of Christ and representatives of the ancient Pentecostal Church of the first century) do not deal as openly as the metaphysicians, in word put Jesus in the" Center "but in fact, Only their decrees and those of the Anointed One matter, and God will have to fulfill them (it does not matter if God seems good or not, they already "Decretaron" it). To them the Word can be applied:
13 The Lord says:
«This people praise me with their mouths

And honors me with the lips,
But his heart is far from me.
His worship is nothing more than a mandate
Taught by men.

In the case of the Neo-Pentecostals, the "Anointed One" will not retreat to Venus, but to an important Mansion in an expensive Private Condominium.

Wake up you slept !! Week 70 is about to begin, all your "Declarations and Decrees" will be useless on the Day of the Lord, when the True Wife of the Lamb is snatched away, and you stay with the Metaphysicists, declaring as silly after all.