CHRONICLE OF A MARCIAN CHURCH. BY FABIAN MASSA. 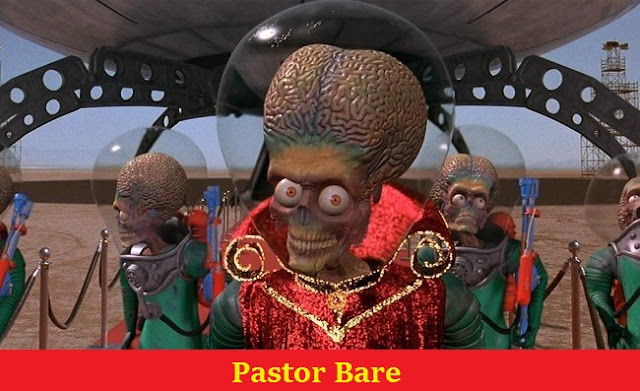 CHRONICLE OF A MARCIAN CHURCH. BY FABIAN MASSA.

A strong wind descended from the summit of Mount Olympus, swirling the fine red sand of the dunes. Blond Fat looked at the sky, it was noon and they should soon be leaving for the 7th Day Meeting. No one in the family wanted to go, neither Ruby, nor her daughter Barbie and less her son-in-law Ken.

Blond Fat slowly pulled the small communicator from his belt and thought for a few seconds what excuse he would put this time for not attending.


Last week it was said that it did not have enough galactic credits to buy liquid hydrogen for its transporter (it was imported from Jupiter, very expensive !!)

Blond was perspiring, he could not think of any good reason (which he had not used), so he called his wife, who was in the bedroom resting:

.- What will we say not to go to the Worship today?

Ruby Fat thought for a few moments as he looked out the window as Phobos and Deimos, the moons of Mars he loved, came out.

.- Tell him that we are spending a family evening with the grandchildren, the first is the family.
Blond nodded, it was a very good idea, Pastor Rogers was a family man. She touched the photo of Pastor Rogers on the communicator screen. In a few moments Rogers answered the call.

.- Hello Pastor, I called him to tell him that we will not go today, we have a family reunion and are all my grandchildren.

Rogers was silent for a few moments ... he knew that Blond sees his daughter and grandchildren seven days a week, but hey, I could not force him to listen to the Word of God, so with his best voice of "all is well" I answer.

"Blond is fine, the family is the first."

Pastor Rogers put the communicator back in his belt case while looking at the red dunes through the glass dome of the little church on the north slope of Mount Olympus and wondered what it was that was doing wrong, it was already The third day of the month of the month that no one attended the Meeting.

Not only would the Fat and the Queni not attend, neither would Harry Dirty, Flabby Juarez and Edna Krabappel, that is, nobody ...

The small herd had left the Great Marineris Valley Church, fleeing from Pastor Bare's "3-verse Prosperity Cults and Two Concordances," and had chosen to go to the small Church on the North Slope where Pastor Rogers prepared some Excellent sermons.

During the first year, the small congregation attended the services gladly, they left each meeting satisfied with so much spiritual food, but over time, Pastor Rogers began to require them to study Scripture, to read, and to participate actively in the Worship and it was then that they understood that deep down they did not want to understand, nor learn, nor to serve, nor to participate .... they just wanted the Lord to bless them and prosper them in their things without assuming any commitment.

They began to miss those "Cults of Fire" of Bore, with their fiery declarations of Power and also missed those sweet melodies that made them so sentimental.

Finally they left the Little Church on the North Slope and returned to the fireworks of the Charismatic Show of Pastor Bare.

Note: This is a story of the Colony of Mars, where these rare things happen.

Here, on the Blue Planet, we attend the Church every cult, we have daily communion with the Lord through his word. Men are priests of their home and the whole family tries to walk on the Path, helping each other.

Wake up Martians, Week 70 is coming, do not stay outside.