STUDY. THE QUEEN POTATO, THE CHICKEN ARAUCANA AND THE CHILDREN OF CAM. BY FABIAN MASSA 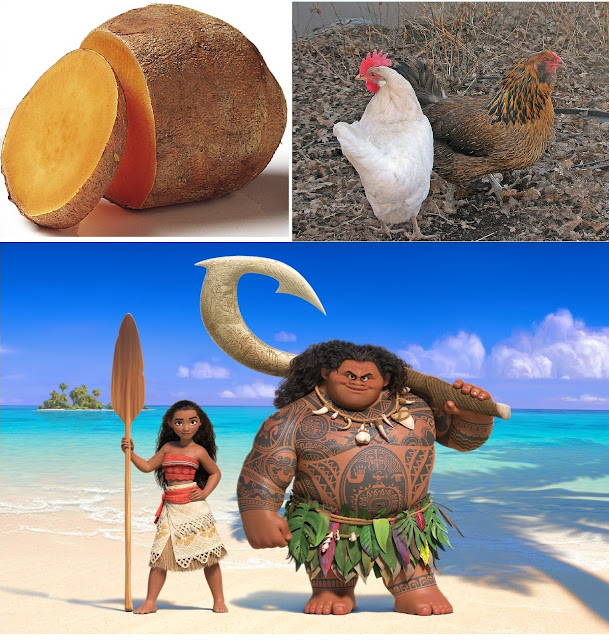 STUDY. THE QUEEN POTATO, THE CHICKEN ARAUCANA AND THE CHILDREN OF CAM. BY FABIAN MASSA

The Batata is a native plant of South America, nevertheless this plant is in the diet of Polynesians from the 1000 d.C. [1]
The Gallin Araucana or Mapuche [2], is actually native to South Asia, and they were in Chile long before the Spanish arrived about 1550.


In 2007, archaeologist Alicia Storey and her colleagues reported the discovery of remains of hens at the Arenal-1 archaeological site, located in the Arauco peninsula (Chile). The samples were dated with C14 between 1304 and 1424 d. C., much more than a century before Portuguese and Spaniards arrived at South America.
How can this be possible? The only explanation is that there was a flow of Polynesian emigration across the South Pacific to the coast of Chile.

The answer is concrete based on the genetics of polynesian hens that respond to two haplogroups:

After the Confusion of Babel, the Nation of a single Language was divided into three distinct Nations:

From Oceania, the distant descendants of Cam brought their Polynesian Chickens to the South of Chile, taking the American potato back to their Earth. Then about 1500 d. C. Europeans, distant descendants of Japheth, also arrived at America. The Dispersion of the Tribes to fill the Earth initiated in Genesis 10 and 11 had concluded.