THE HOLY INCOHERENCE. BY FABIAN MASSA 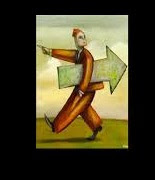 THE HOLY INCOHERENCE. BY FABIAN MASSA

First of all, it is necessary to define the term.

1. f. Lack of coherence.
2. f. Which has no proper logical relationship with another.

We have, then, a lack of logical relationship between parties. Incoherence always starts from a contradictory view of the individual and is projected on everything he does, causing unnecessary wear and tear, frictions, disagreements, failures, loss of goods, time, effort, patience, interest in the thing, frustrations And of course also money.
The sum of the incoherences of each individual seems to create a "collective Incoherence", that can be seen in the Churches, where people sings crying "For a moment in Your Presence" but does not read your Bible throughout the week.

No one is exempt from falling into it:


It is necessary to see what level of incoherence our actions have, and to remove any lack of logic. Week 70 is about to begin, let's be consistent.