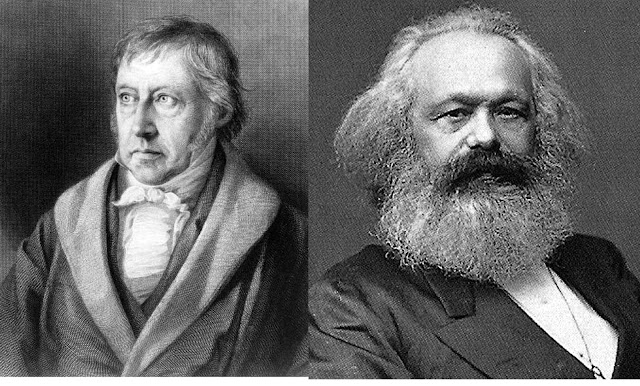 To understand our present, it is necessary to have a clear vision of History and especially of the last two centuries.

The Manifesto was commissioned by "The Communist League," an international working organization, Carl Marx and Frederick Engels, at the congress held in London in November 1847.
It is a detailed wording of the theoretical and practical program of the party, suitable for advertising.
The central idea that inspires the whole Manifesto

"That the economic regime of production and the social structure which necessarily derives from it in each historical epoch constitutes the basis on which the political and intellectual history of that period is based, and that, therefore, History of society - once dissolved the primitive regime of community of the soil - is a history of class struggles, of struggles between exploiting and exploited classes, dominant and dominated, in tune with the different phases of the social process, until the In which the exploited and oppressed class - the proletariat - can no longer emancipate itself from the class that exploits and oppresses it - of the bourgeoisie - without forever emancipating society from oppression, exploitation and the struggles of lessons; This cardinal idea was the personal and exclusive fruit of Marx. London, 28 June 1883. F. ENGELS ". In prologue to the German edition of 1883.

Engels sees the whole process historically, as in each age there were more or less the same struggles, between those who wanted to dominate and those who refused to be.

ENGELS VISION OF REALITY IN 1890

In the prologue to the German edition of 1890, Engels refers to the economic growth that gave European immigration to the United States. In agriculture and also in industry, foreseeing that the USA would become a power that would overshadow the old Europe, something that finally took place from 1943, with the entrance of the USA. In World War II.
It also notes that "... while in the industrial regions a large proletariat and a fabulous concentration of capital are beginning to form."
The triumph of the proletariat in Russia. Engels says: "The Communist Manifesto intended to proclaim the imminent and inevitable disappearance of bourgeois property in its present state. But in Russia we find that, coinciding with the capitalist order in feverish development and bourgeois ownership of the soil that begins to form, more than half of the land is common property of the peasants.
Now, we wonder, can this communal regime of the Russian council, which is undoubtedly a degeneration of the primitive community of the land, switch directly into a higher form of communism of the soil, or will have to pass Necessarily by the same prior process of decomposition that reveals the history of Western Europe?
Anticipating the revolution of 1917 Engels asks: "If the Russian revolution is the signal for the workers' revolution of the West and both are completed by forming a unit, it could happen that this Russian communal regime was the starting point for the implementation of a new form Communist of the earth ".
But as Feinmann well said in his class * Capital * [1], the Russian Revolution spelled itself out. The U.R.S.S. Died as a communist political project in 1991 during the government of Mikhail Gorbachev, leaving today a remnant of the slowly dying Revolution in Cuba.

A spectrum hangs over Europe: the specter of communism. Against this spectrum, all the powers of the old Europe, the Pope and the tsar, Metternich and Guizot, the French radicals and the German policemen have been conjured up in holy pack.

The whole history of human society, up to the present, is a history of class struggles. Free and slaves, patricians and plebeians, barons and serfs of the land (land, land), teachers and officers; In a word, oppressors and oppressed, face to face always, engaged in an unbroken struggle, veiled sometimes, and others frank and open, in a struggle that leads at every stage to the revolutionary transformation of the entire social system or the extermination of Both belligerent classes.

Here, too, a parallel can be observed with Hegel's Master and Slave [2], the beginning of History is by the relations of two desiring consciousnesses (classes for Marx), in an eternal struggle to subdue each other.


Here, too, a parallel can be observed with Hegel's Master and Slave [2], the beginning of History is by the relations of two desiring consciousnesses (classes for Marx), in an eternal struggle to subdue each other.

The discovery of America, the circumnavigation of Africa opened new horizons and gave new impetus to the bourgeoisie. The market of China and the East Indies, the colonization of America, the exchange with the colonies, the increase of the means of exchange, and the merchandise in general, gave commerce, navigation, industry Of the sciences), a thrust never known, fueling with it the revolutionary element that was hidden within the feudal society in decay.
The tremendous growth of the nineteenth century, which occurred in all fields, culture, art, economics, industry, commerce.

The tremendous inequalities between the bourgeoisie and the proletariat reach their maximum expression in the Industrial Revolution.

The weapons with which the bourgeoisie overthrew feudalism now turn against it. And the bourgeoisie not only forges the weapons that will kill him, but also puts on the stand the men called to manage them: these men are the workers, the proletarians.

The Death of the Bourgeoisie, something that has not happened and seems to never be, especially after the crushing failure of Communism, where its greatest current representative, CHINA is a champion of capitalism whose basis is the exploitation of the Chinese proletariat at the hands of The leaders of the Communist Party, become in the New Masters.

Thus, for example, the French Revolution abolished feudal property to establish bourgeois property on its ruins. What characterizes communism is not the abolition of property in general, but the abolition of the regime of property of the bourgeoisie, of this modern institution of bourgeois private property, the last and most complete expression of that regime of production and appropriation of The production that rests on the antagonism of two classes, on the exploitation of some men by others. Thus understood, can the Communists summarize their theory in that formula: abolition of private property. We are reproached for wanting to destroy well-earned personal property, the fruit of human effort and effort, that property which is for man the basis of all freedom, the stimulation of all activities and the guarantee of all independence.

In my view, Communism as a philosophy (and therefore as a political movement is bound to fail), as everything that is radicalized:

Marx and Engels ask: "Do you fear that we want to abolish private property, as if, within your present society, private property was not abolished for nine tenths of the population, as if it did not exist at the expense of Not to exist for those nine tenths parts! What, then, do you reproach us for? Want to destroy a property regime that has as a necessary condition the dispossession of the vast majority of society. "

The feeling I have in reading this is "How we proletarians can not even have 10% of private property, we will ruin their 90%" When a win-win proposal would be "How can we make a fairer distribution of The profits, so that each union has what it takes to have a decent life"

Communism does not deprive anyone of the power to appropriate social products; The only thing that does not admit is the power to usurp through this appropriation the work of others. It is argued that, abolishing private property, all activity will cease and universal indolence will reign.
The problem was that once some of the proletarians reached the tip of the Pyramid of the Proletarian Revolution, they forgot everything and became the New Masters, and as they had no culture, no education, they were much more gross, harmful And barbarians than the "Illustrated Despots", the famous syndrome of the "Risen Louse [3]". This can be seen today in North Korea, that while people starve to death, the Great Leader Kim looks fat and giving all the likes and dislikes.

As you will see, the theme is that the Communist Boys and their great ideas are as nice and agreeable as their opposites, the "Chicago Boys", because ultimately, when they come to power, ALL are forgotten that they were once poor and Apply themselves to oppressing the poor tenaciously.

Week 70 is about to begin, this far from improving will go worse and worse. Capitalism will become more and more rabid until the time of Revelation 6: 6 arrives: "And I heard as a voice in the midst of the four living creatures, saying," A pound of wheat, or three pounds of barley, for wages Of a day; But do not affect the price of oil and wine. "

COMMUNIST MANIFESTO, THE LOVE AND THE SLAVE, HEGEL, MARX, ENGELS,