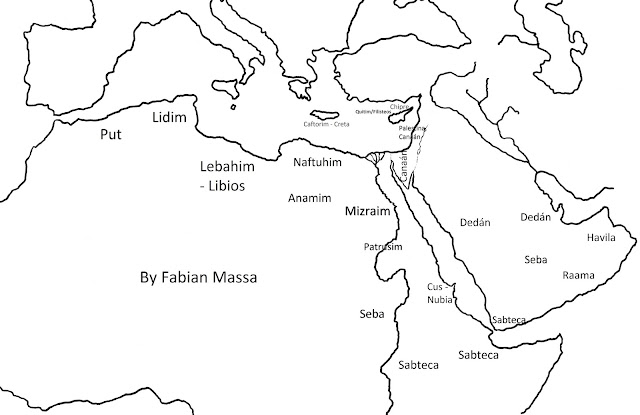 In chapter XX of the book *DE EDÉN A LAS NACIONES*  we expose about the descendants of Sem and Cam. In this post I leave a news on Misrayin and Fut.

Misrayin penetrated Africa via Egypt, where it gives origin to a multitude of towns,
3 Misrayin was the ancestor of the Lydians, the Anamites, the Leabites, the Naphtuites, the Patruseans, the Caslujites, and the Kohathites, from whom the Philistines descended. Gen.10.13


Misraim Egypt or red earth. Second son of Ham (Genesis 10: 6, 13) and ancestor of the Egyptians. The Hebrew word probably refers to the two Kingdoms of Egypt the North and the South. In Hebrew Mitzraim, it comes from the word meitzarím that means limitations.

Ludeos: People linked to Egypt, they migrated from North Africa to Asia Minor (Turkey's southern coast, on the Mediterranean) and there they settled (Kingdom of Lud).

Anameos: People connected to Egypt south of Cairo. Heb. Anamim. Tribe or region of Egypt (Genesis 10:13, 1 Chronicles 1:11); Which has been identified with the great oasis of Kemet [1] "Black Earth" (ie fertile) which was the name that the Egyptians gave to their country.
Patruseos: People linked to Egypt, located in the Northern Kingdom (Patros) or Upper Egypt [2], and descendants of Mizraim. (Genesis 10:14, 1 Chronicles 1:12).

Libya: (now a country to the west of Egypt) Lehabim: heb. Lehâbîm, llamas or Lubin, Libyans; Son of Mizraim or descendant of him (Genesis 10:13, 1 Chronicles 1:11), of whom the Libyans of the north of Africa presumably descended.

Put / Fut: (Heb. Pût; Babylonian Put; Elamita Putiyap: Persian Putaya). Fut (Jeremiah 46: 9), the progenitor of a people closely related to Mizraim (Egypt) and Cush (Ethiopia or Nubia). Egyptologists identify Fut (Put * in Jeremiah 46: 9) with Punt, a country on the African coast of Somalia and Eritrea, where the Egyptians sent expeditions to obtain myrrh, leopard, ebony, ivory and other exotic products . There is no certainty regarding the exact identification of Fut.

DESCENDANTS OF CAM IN AFRICA, *DE EDÉN A LAS NACIONES* 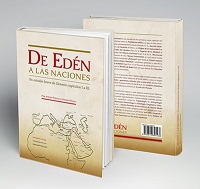 [1] The Egyptians called their country Kemet, Black Earth.
[2] Upper Egypt is called the southern part of the country, extending from the south of the ancient region of Memphis (near Cairo), to the first cataract of the Nile River (in Aswan). Wikipedia.

*DE EDÉN A LAS NACIONES* DESCENDANTS OF CAM IN AFRICA