4th INDUSTRIAL REVOLUTION - A WORLD IN CHANGE. BY FABIAN MASSA. 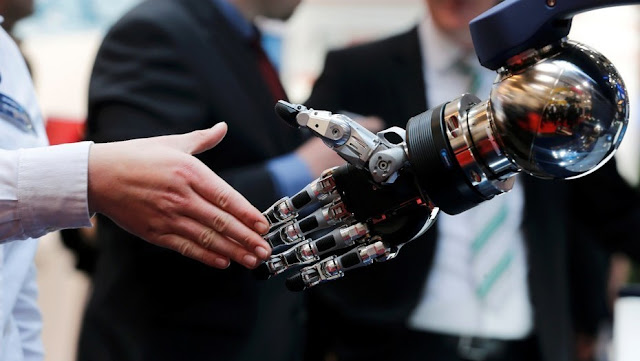 For more than two years I have been posting information that comes out in the newspapers, that is, something that is available to all, but few people read, the less they understand it and the less they are prepared:

About a publication of the newspaper Clarín of Buenos Aires - Argentina of 01/10/2017
There are already more cell phones than toothbrushes. The largest fleet of "taxis" in the world belongs to a firm that does not have its own cars: Uber [1]. In Argentina alone, the Airbnb platform [2] outperformed the major hotel chains, without having any room in its name. The company that brings together the largest volume of content worldwide (Facebook) does not need editors and does not actually generate text. Amazon [3], the huge logistics company, lacks virtually stock. And there is no way to escape those concepts that millions of subjects dominate with the same ease with which (yet) many resist: "algorithms", "cyber-security", "smart-cities", "Internet of Things" or fearsome "big-data".


Something changed. Something enormous and radical, of historical weight. Experts believe that as we are living now we do not realize its magnitude. And also: that it does not have an intended end, precisely because it is part of its essence to be innovation, to be permanent transformation. It is the Fourth Industrial Revolution
The 1st Industrial Revolution had been the protagonist of the steam engine, and saw the passage from the rural and agricultural economy to an urban and mechanized.
In the 2nd Industrial Revolution, the size of markets widened thanks to industrialization and new sources of energy: gas, oil and electricity.

The 3rd Industrial Revolution, of "scientific-technological" profile, brought renewable energies and smart technology.
From the first to the third Industrial Rev., it can be said that these were times of change. From the 4th Industrial Revolution says Érica Chávez Castillo, Microsoft: "This is not a time of change, but change marks the time." To understand it with an example: "If you move from the disk of the folder to CD-ROM , technology is being replaced. But from the CD-Rom to Spotify what changes is the business model. "

And how are we in Argentina? As explained in a national diagnostic report that the Ministry of Modernization shared with this medium, "although connectivity seems such a basic resource, in Argentina only one in three people has access to the Internet, and almost 40% lack knowledge to handle it ".

"In Argentina, only one in three people has access to the Internet, and almost 40% do not have the skills to deal with it." This, put in figures: Of the 40 million inhabitants, only 12 million have access to the Internet. Millions, only 4.8 Million know how to use it, in short only 12% of the population of Argentina would be able to assimilate and take advantage of the change. Without an education program, the remaining 88% will be in inferiority of conditions and those who do not want (or can not or do not know) to jump to change, will be out of the circuit in a few years. We stand in the face of the possibility that the Social Inequality Crunch will definitely become an insurmountable precipice.

5 When the Lamb broke the third seal, I heard the third of the living creatures cry out, "Come!" I looked, and a black horse appeared! The rider had a balance in his hand. 6 And I heard a voice in the midst of the four living creatures, saying, "A pound of wheat, or three pounds of barley, for a day's wages; but do not affect the price of oil and wine ».

This prophecy of Revelation 6.5-6 speaks of this, of a great economic oppression that will only affect the poorest, those who "eat bread", while the richest 10% will live in great opulence.

Week 70 is at the gates, awake you who slept, and also you, who sleep.

[1] Uber Technologies Inc. is an international company that provides its customers with a private transportation network, through its mobile application software (app), 2 which connects passengers with drivers of vehicles registered in their service, which offer a shuttle service to individuals. The company organizes pickups in hundreds of cities around the world and is headquartered in San Francisco. https://en.wikipedia.org/wiki/Uber
[2] Airbnb is a company and software platform dedicated to the provision of private and tourist accommodation. The name is an acronym for airbed and breakfast (inflatable mattress and breakfast). Airbnb has an offer of about 2,000,000 properties in 192 countries and 33,000 cities. From its creation in November 2008 to June 2012, 10 million reservations were made. https://en.wikipedia.org/wiki/Airbnb

[3] Amazon, Inc. (NASDAQ: AMZN) is a US-based e-commerce and cloud computing company at all levels based in the US city of Seattle, Washington State. Its motto is and you're done (translated into Spanish: "you're ready"). It was one of the first big companies to sell goods through the Internet. Amazon also owns Alexa Internet, a9.com, Shopbop, Internet Movie Database (IMDb), Zappos.com, DPreview.com, The Washington Post and Twitch. Amazon has established independent websites for the United States, Canada, the United Kingdom, Australia, Germany, Austria, France, China, Japan, Italy, Spain, the Netherlands, Brazil, India and Mexico to offer products from these countries. At present it is totally diversified in different product lines, offering DVD, music CD, software, video games, electronics, clothes, furniture, food, books, etc. It is the most valuable retail brand in the world according to the BrandZ index https://es.wikipedia.org/wiki/Amazon.com