SHARED. Holiness as the Pharisees . By Fabian Massa 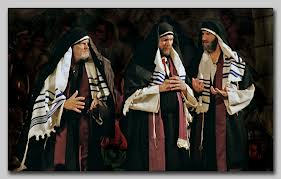 15 happened that as Jesus sat at meat in his house , many tax collectors and sinners were * sat down with him and his disciples, for there were many who followed him . 16 When the teachers of the law who were Pharisees saw who ate, they asked his disciples :


- And he eat with tax collectors and sinners ?
17 Listening to them , Jesus replied :
- Not the healthy who need a doctor but the sick. And I have not come to call the righteous but sinners .

Levi was in his position taxing the seashore when Jesus passed by, they saw him and called him simply saying "follow me" (Mark 2:14).


Levi was a " Publican [1 ]" what today would be a public employee of the Tax Administration office , his task was to collect taxes. They collected the tax for the Empire, had no salary, had to charge a little more of the actual tax in order to have an income. Some abuzaban this enriched at the expense of its neighbors, as you can read in the story of the conversion of Zacchaeus , who was chief of publicans :

8 But Zacchaeus stood and said :
Look, Lord, I will now give the poor half of my possessions , and if I have defrauded anyone of anything , I will pay back four times the amount that is .
NIV Luke 19.8 .

In the eyes of the scribes and Pharisees , sitting at table with tax collectors and the vulgar people was something scandalous .
And he eat with tax collectors and sinners ? Biblically, a sinner is one who systematically violates God's law . But from the standpoint of the Pharisees , a sinner was one who did not interpret the Torah ( Law ) as established by the Scribes .
From their point of view , not only the publicans and the rabble who were dining with Jesus were sinners , but that Jesus and his disciples were [2 ] , because He made ​​them very angry Master increasingly breaking any of their rules, such as healing on the Sabbath to a blind man :

For the Pharisees , the common people who did not know their complex interpretations of the law, were mere "cursed" :

But these people do not know the law is accursed . John 7.49 , Jerusalem Bible .

Self-righteousness is not gone , but is very effective especially in the Church of Christ. They are those for whom it is valid only follow " their interpretation " of the Word that the Word itself.

They see holiness according to his particular way of understanding the Scriptures :


To the Pharisees they were only saved and the other a poor ignorant sinners who would burn forever in the Lake of Fire and Brimstone . The Pharisees before as today the sin of pride : "We have the Absolute Truth and who does not think like us .... "

But Jesus said :
20 For I say to you , they will not enter the kingdom of heaven unless your righteousness surpasses that of the Pharisees and the teachers of the law .

Week 70 is about to begin , only the true believers will be saved. If anyone is a legalist , repent .