STUDY. You really found Sodom & Gomorrah and the crossing of the Red Sea. By Fabian Massa.

Cities around the Dead Sea. 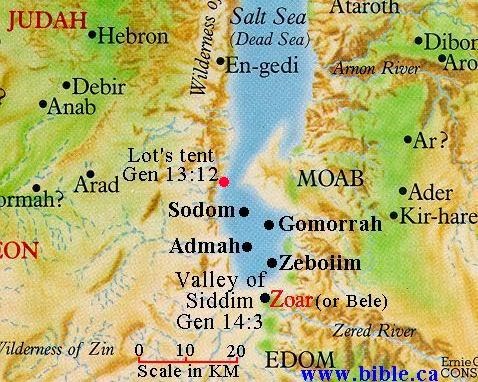 According to what the Scripture says, the cities of Sodom , Gomorrah , Admah and Zoar Zeboyim were situated wax each other , around the Dead Sea, in the woodland vale . Scholars agree with the Bible concerning the location of these cities .
Some archaeologists believe that would ancient Numeria Gomorrah. According to archaeologists and others as the "Theory of liquefaction " , it is feasible that a large earthquake destroyed these cities and caused a decrease in the level of the land occupied by them , leaving their ruins flooded by the waters of the sea.


Canadian Geologists Harris and Anthony Graham discovered Berardow Lisan Peninsula , to the east of that sea, was the epicenter of a major scale earthquake six in the Richter scale occurred approximately 4000 years ago (time consistent with the the destruction of Sodom , Gomorrah , Admah and Zeboyim ) .

According to these geologists , the earthquake caused liquefaction effects in the field ( the field is liquefied because there is a porous material that fills with water and the soils are saturated once behave like a fluid under the action of seismic waves , causing the gobbling of buildings ) . Gomorrah remains repose beneath the waters of the Dead Sea , but in a different location from the original. [1 ]

Ron Wyatt , claims to have discovered the cities of Sodom and Gomorrah , you can enter at: http://www.es.amazinghope.net/el-descubrimiento-de-las-ciudades-biblicas-de-sodoma-y- gomorra /

Wyatt says that not only found the location of cities, but also able to identify the layout of the streets , the walls around her, stones sulfur ( the Bible says about cities sulfur rained on) .

B. The crossing of the Red Sea .

Once Israel left Egypt, in two days more they reached the banks of the Red Sea . Pharaoh realized he had left from a people of slaves who paid him important services and regretted having allowed , so decided to give them power to force them to return to Egypt . It took over an army of six hundred chariots with their best officers , pulled his numerous cavalry , besides the troops in combat transport . The chase began in full swing. The roar of the carriages and the dust they raised could be seen from far in the desert.

The Israelites saw them move and fear fell upon them , were in a death trap : Pharaoh Behind and in front the sea. There was no escape .
This is when God performs the miracle of open water and sea people dry step . The Egyptians followed , but when they were halfway , the waters closed and perished all drowned , while Israel was safe on the other side .

Scholars pose the following problem , Israel may have followed two possible ways out of Egypt , each with its crossing of the Red Sea :

a. The Southern Route : Traditionally it is believed that the crossing of the Red Sea occurred in the Gulf of Suez. However, there are no mountains . The area is flat, and does not fit the Biblical description . The Gulf of Suez became a very popular because it is traditionally believed that Mount Sinai is on the Sinai Peninsula. 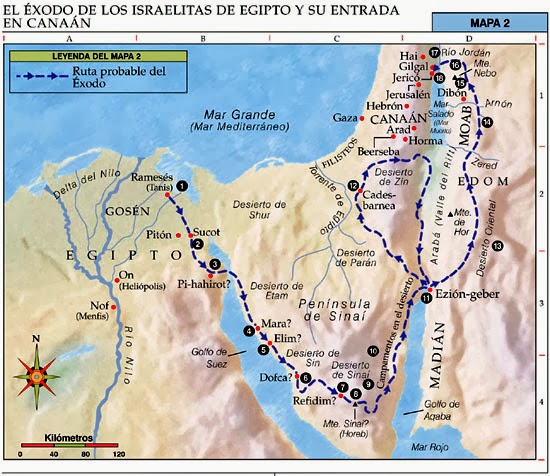 b . The Northern route :
Ron Wyatt scouring the land described in Exodus , discovered in 1978 [2 ] a deep gorge that runs enclosed terrain elevation , called Wadi Watir .
This description is consistent with the report that was given to Pharaoh concerning the posting of Israel out of Egypt : " They are entangled in the land , the wilderness hath shut them " Exodus 14:3

In addition to marking an alternative route for the exodus , Wyatt argues that the Red Sea crossing took place in Nuweiba , arguing that the sea at that point has a " natural bridge " at no great depth and that Israel crossed the bridge dry . 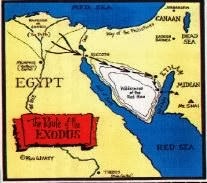 · Fixed a location for the Mt. Sinai outside the homonymous peninsula , placing it in Saudi Arabia.
· He claims to have discovered remains of Egyptian chariots in the sea up to Nuweiba . These findings of Wyatt not have the endorsement of any specialized institution.

From the point : Noah's Ark [ * ] , B and C Sodom and Gomorrah Crossing the Red Sea No information has been discovered something in Christian sources ( Bible dictionaries , encyclopedias , commentaries , Bible atlas , specialized Bibles comments ) nor in serious secular sources as universities, associations of Archaeology , history books , research papers , etc. ...

· The remains of Sodom and Gomorrah.

· Stones of sulfur in the ashes of Sodom and Gomorrah.

· The Tower of Babel , south of Turkey.

· The way the Egyptians built the pyramids.

· The place where the Israelites crossed the Red Sea , located in the Gulf of Aqaba .

· Wheels cars and other relics of the army of Pharaoh , located at the bottom of the Red Sea .

· The site of the Biblical Mount Sinai in Saudi Arabia.

· The rock of Mount Horeb from which water flowed when it was struck by Moses.

· The location of the earthquake of Korah .

· A camera at the end of the maze of tunnels under Jerusalem containing various artifacts of the Temple of Solomon.

· The site of the crucifixion of Jesus.

· The Ark of the Covenant and the stones with the Ten Commandments.

· Blood of Christ, shed on the mercy seat of the Ark of the Covenant under the supposed site of the crucifixion .

Unless the Holy Grail ( Discovered by Indiana Jones in the movie Indiana Jones and the Last Crusade ) and King Solomon's Mines ( film based on the novel of the same name by H. Rider Haggard , 1950 ) good old Ron has found everything otherwise .....

Ron Wyatt has exploited the hunger for this kind of "good news" of the believers and made ​​an excellent staging, many have believed . The proof is that the information of the Ark , the crossing of the Red Sea and the discovery of Sodom and Gomorrah can be found replicated countless churches all over the web . Wyatt 's discoveries have only been taken into account by the most innocent , as any academic institution or non-Christian Christian gives credence . It would be good to alert pastors and brothers gullible and less educated to avoid falling into the trap of taking seriously these " discoveries " .

According to the biblical account of the Flood swept the world Old : Society, culture , animals , plants, etc. . The only thing that survived was what Noah got into the ark .

· Your family ( which is after all the earth would people )

The Ark ran aground on Ararat and there were survivors after falling to reach Shinar ( Genesis 11.1 - 3).
When with my friend Adrian Pablos study this issue , we conclude that because the Ark rested on Ararat , would have to find plants and animals that scientifically can locate its origins in the Middle East . Here I mention only a few points .

1. Both current domestic sheep and wild ( Mouflon and Uriales ) belong to the same species as their wild ancestor , the Asian mouflon Ovis orientalis classified as sheep ( Eastern ) : I mean, all descended from a single species from the Middle East, all leads to the sheep that Noah would have brought in the ark . [12 ]

Two . The same thing happens with the sheep can be said of the pig, goat, cow , bees .

Three . The cultivation of wheat and barley in the post http://www.tesorosdesabiduria.com/2013/05/el-pan-nuestro-de-cada-dia.html studied originate from the Middle East , specifically the region Mesopotamia [ 13 ] . No usage records or previous cereal crop plants to 8,000 . C. in any region of the planet , so that would be the starting point for the new humanity in Mesopotamia , the region where the flood survivors settled . For we take as true the story of the Flood , it is obvious that these crops are native to the Middle East for the simple reason that there ended the journey of Noah in the ark .

April . The same for wheat and barley can be applied to the grapes, olives , and other grains.
Indirect evidence is as mankind dispersed from Sumer to the rest of the World . This implies the emergence of different cultures , languages ​​and how they evolved ( see The Dispersion of Eden to the world [ 14 ] ) .

There is much good material to study, and much more to investigate. The important thing is to understand that we are saved by faith , believing in the Word of God. Finding evidence or not should not change our faith. Obviously if we find them , we'll be happy and share with joy. But this should not determine our faith. Nor need "fabricate " evidence " to evangelize , the " wonderful discoveries " of Wyatt , which have not been approved by any competent authority ( Christian or secular ) rather than attracting people to the faith , the scare .

Remember that without faith it is impossible to please God.