Reflection. Christian denominations, "The Matrix" is not just a movie. By Fabian Massa. 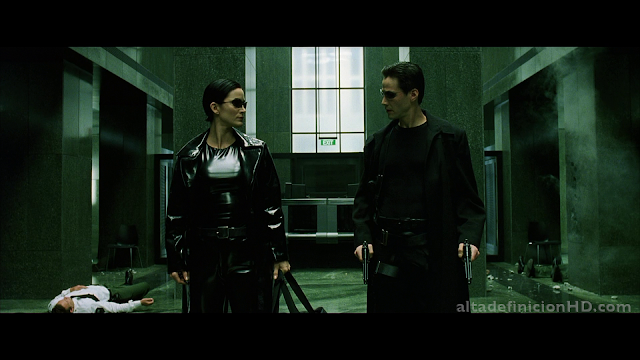 Week 70 shares with us: "Names," The Matrix "is not just a movie

The film is set in the future where nearly all humans have been enslaved by machines with artificial intelligence. These have in the bio-suspension with their minds connected to a social simulation that represents the end of the twentieth century, The Matrix.
Humans are used by machines for energy, and the few human descendants of those who did not fall into the networks of robots or who have been released from Matrix, they live in the city Zion. From there, a small fleet of ships moving through the ground, entering clandestinely to Matrix and trying to release more and more people connected, looking for those who sense that something is not right in the illusory world in which they live.

But there is also a free character called Cypher, which comes into contact with the Matrix to betray his friends in exchange for fame and power.
In the film, The Matrix is ​​a New World Order run by artificial intelligence, which few can escape.


The word Matrix is ​​very interesting, the Mat root comes from the Indo-European Mater (pass literally into Latin: Mother) and the suffix Trix means agent (switches to Spanish as "die"), it is the female equivalent of Tor (agent, executor: doctor , actor, builder). So we have the words in Spanish:


In the film, The Matrix is ​​that formats the minds of men so that they Sheep Matrix, people and useful to the system under which they literally "suck" as a vampire Life Energy.

The Sheep Matrix, have lost the ability to think, analyze and see things for themselves: Their brains have been washed and only know what the Matrix says that "is real", transforming their lives in a power plant to feed The Matrix.
In real life, we can see that there are several Matrix coexist simultaneously, and for those who look at them from the outside, it seems incredible that those inside do not realize that "reality" is unreal.

Immersed in a Matrix, people can identify other connected to their Matrix, but can not realize your own situation. This is clearly in international politics, for example most Argentines realize that Maduro's supporters in Venezuela are totally confused and absorbed by the Venezuelan Public Policy Matrix, however do not recognize that they are brutalized by Matrix Official Politics Argentina.

Within Christianity goes something like, Pentecostals have a look of false mercy (not to say "holy contempt") for all other denominations (which he considers "non-spiritual"), because the poor Baptist / Methodist / Refreshed, etc. They do not have the baptism of the Holy Spirit.

Now, when you talk to a Christian of any denomination, you can be seen with the same feeling of superiority over the others. However all denominations agree to consider the Pentecostals as the most ignorant of all Christian spectrum, thought with which I (as a member of a Pentecostal church for 15 years, but define myself as "Christian to Dry") I fully agree .

And Paul in the mid-first century A.D. He admonished the Corinthians for being sectarian:
10 I beseech you, brethren, in the name of our Lord Jesus Christ, who all live in harmony and that there be no divisions among you, but that you be united in the same mind and the same purpose. 11 I say this, my brothers, because some of Chloe's household have informed me that there are quarrels among you. 12 I mean, some say, "I follow Paul"; others say: "I follow Apollos"; another, "I follow Cephas"; and another, "I follow Christ." 13 How! Is Christ divided? Did Paul crucified for you? Or is it that they were baptized in the name of Paul? 1 Corinthians 1.10-13, NIV.

Each of these denominations has its own theology, in order to sustain their own sectarianism. What is clear is that to "make my own doctrine" necessarily I have to fend off the Doctrine of Christ.

Some Christians (like Morpheus, Trinity and Neo in the film) have escaped from the lethargy of the Matrix and trying to "turn off" all you can showing a deep look on Scripture, because only one who knows the truth will be truly free. This is the purpose of my blogs.

But other sinister characters, has sold his soul to the Matrix, and working there, trying to get new lives which "suck resources": Your time, energy and money in order to have your Mega Church 50,000 people (50,000 converts say no, but "50,000 people" to dry) which they say is "the vision that God showed them."

In John 8.31-32, Jesus told the Jews (read Jewish type "religious") who believed in Him and says now: "If you hold to my teaching, you are really my disciples; 32 and know the truth, and the truth shall make you free.

Paraphrasing one could say, "Jesus told the religious of his time would be his disciples if they understood and practiced the truth, no religion (Matrix)".Week 70 is about to start and stop being a "Borrego Matrix", identifies hidden under color of piety and camouflaged "Anointed" "Cypher". The Matrix salt and connect to God's Word, so you're free. The time of the end is near, are we ready?