Short note. Getting rid of the influence of anthropocentrism of Greek thought. By Fabian Massa 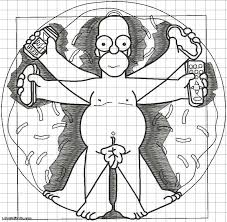 The dream of Alexander the Great was the Hellenization of the World. With the conquest of the Roman Empire of the Greek territories, it seemed that the dream had come to an end, but the Romans were conquered by Greek culture and undertook to meet fully the desire of Alexander, imposing it on all the territories for them dominated.

These civilizations merge in the Greco-Roman, which had its development in the Mediterranean basin and has a strong character anthropocentric (man-centered).
For this culture, the importance of man lies in his own humanity, their quality and rational thinking being capable of creating a new world without relying on traditional beliefs.

Man is the measure of all things, says Pythagoras, the Greek art and everything is tailored to him and the same. Greek buildings and sculptures, were taking man as the measure for your enjoyment. Even their gods have exacerbated the most basic human passions, such as jealousy, envy, sensuality, resentment, fear, hatred, revenge, lust and greed.

This anthropocentrism we can see today in the constant search for the pleasures of the body, which moves most of consumerism: clothes, fashion, cosmetic surgery (to correct based on the natural beauty of laboratory models), music, etc. Everything pleasure the body is well seen and approved. The motto is: If you please, do it !!

The contributions of Greek thought to culture and science is great, the big problem of Greek thought, for who wants to be a good Christian, is the anthropocentrism, which is to take man as the measure of all things.

How do I get rid of anthropocentrism? Rolling his eyes on Jesus, the author and finisher of our faith. (Hebrews 12.2) that is taking Jesus as a model and as a goal. Everything fits in the believer's life when its reference point and goal is Jesus.
Paul also teaches: 26 You are all sons of God through faith in Christ Jesus, 27 for as many as have been baptized into Christ have put on Christ. 28 is neither Jew nor Greek, slave nor free, male nor female, for you are all one in Christ Jesus. Galatians 3.26-28 NIV.

At the time Paul writes to the Corinthians: "2 I beg you that when you go do not have to be as bold as I plan to be with some people who think that we live by human standards, 3 For though we live in the world, we do not wage battles as does world.4 weapons we fight with are not the world, but they have divine power to demolish strongholds. 5 We demolish arguments and every pretension that sets itself up against the knowledge of God, and we take captive every thought to make it obedient to Christ. 6 And we are ready to punish every act of disobedience, once I can have complete obedience from you. " NIV 2 Corinthians 10.2-6.

2 I beg you that when you go do not have to be as bold as I plan to be with some people who think that we live by human standards, some had accused Paul of living according to the Greek way, that is to say, self-centered (anthropocentric ).

3 For though we live in the world, not wage war as the world does Paul explains that although they have their feet on the Earth, not handled in accordance with Greek thought (humanism).

4 The weapons we fight with are not the world, are the Christ, the Word of God and prayer he gave us

But they have divine power to demolish strongholds. 5 We demolish arguments and every pretension that sets itself up against the knowledge of God, and through God's Word every philosophical argument and all guile that rises in the mind against the Word of God disposes.

And we take captive every thought to make it obedient to Christ. Every thought submitted, in line with the Word of God, ie take Jesus as the center and model (Hebrews 12.2).

Paul already had this problem in the churches in the 50s AD It's been more than 2,000 years of Greek influence in today's Empire of the 4th Beast, which has iron legs and toes of iron and clay [1]; as the current European Economic Community and the countries which were colonized by former members (US and Canada by England; Latin America by Spain and Portugal, England Oceania, etc ...) form a agiornada version of the Old Roman Empire It is undoubtedly the Great Beast that rises from the sea in Revelation 13.
As Christians, Christ must be the measure, the starting point and the goal to achieve. Week 70 is about to begin, are we ready?