REFLECTION. JOEL AND THE WORST LOCUST PLAGUE IN 50 YEARS IN ARGENTINA. BY FABIAN MASSA. 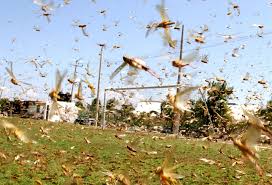 Friday January 15, 2016 it was published a notice in the newspaper La Nacion entitled "The worst locust plague in 50 years plagues several provinces, affecting 700,000 hectares." [1]
The plague that affects the provinces of Santiago del Estero, Tucuman, Salta, Catamarca, San Luis and Cordoba Argentina Rural Confederation (CRA) is warning that a "state of alert" and that the "situation is unsustainable."

The affected area was when the news of 700,000 ha (7,000 km2), directly affecting the mainly agricultural and livestock regional economy. The note explains that producers need to act quickly, before the lobster pass their stage of "Saltona" a "Flying", which is when most damage. The news automatically connected me to the prophet Joel, where he speaks to his nation when he was being crossed by a same plague:


The invasion of locusts. Joel 1 - NIV
2 Hear this, elders of the people!
Pay attention, all inhabitants of the country!
Ever happened such thing
in his time or those of their ancestors?
3 Tell it to your children,
and that they would have their own,
and these to the next generation.
4 That which left the large lobsters
small locusts devoured;
which they left the small lobsters
larvae ate it;
and they left by the larvae
they ate caterpillars.

We can see how the prophet alludes to the different stages of locusts object of his preaching. But what did the prophet Joel ministered about:

3. "Now, declares the Lord -
return to me with all your heart,
with fasting and weeping and mourning. "
4. 13 Rend your heart
and not your garments.
Return to the Lord your God,
for he is gracious and compassionate,
slow to anger and abounding in love,
change your mind and not punish.
14 Maybe God will reconsider and change his mind,
and leave behind a blessing.
The grain offerings and libations
are the Lord your God.
5. 15 Blow the trumpet in Zion,
declare a holy fast,
call a sacred assembly.
16 Gather the people,
purify the assembly;
joined at the village elders,
bring together young
and the infants.
To leave his room newlywed,
the bride and her bridal chamber.
17 Cry, priests, ministers of the Lord,
between the porch and the altar;
and say, "Have mercy, Lord, for your people.
No surrender your property to reproach,
for nations do not make fun of it.
Why will say among the peoples:
"Where is their God? '" Joel 2.12-17 NIV

When the people had repented his wine then the answer of the Lord, a prophecy of restoration and regeneration, Joel 2.18-32.

Joel understood the plague from the spiritual standpoint, that God has control of everything and let the misfortune to sin's Office. Joel when he comes to town not rebuked the demon, and prophesied a 'Time New Prosperity "but confronted each with its sin and called to repentance.

That's what a true prophet of God, according to preach the Word and not according to what people wanted to hear.
In the provinces of Argentina where the pest was developed swarms sin: Submission of the poor at the hands of landlords, abuse of the oligarchs over the people, abuse of whites over indigenous peoples, political corruption, religious corruption (both by Catholics and evangelicals who follow the Gospel of Prosperity), corruption in all spheres of life.
The prophet Joel was sent to Israel to tell what the priest did not dare or did not mean the powerful: Do not oppress the poor and needy. Not violate the laws of greed. Do not abuse the elderly, children, the sick and the weak. But the religious of the time Joel had colluded with the power shift, as happens in Argentina 2016.

Week 70 is about to begin, do not buy you the gospel to those who prophesy Rosa magic solutions. Prophesies what is written, because God left him there to be an example to us (1 Cor 10.6).