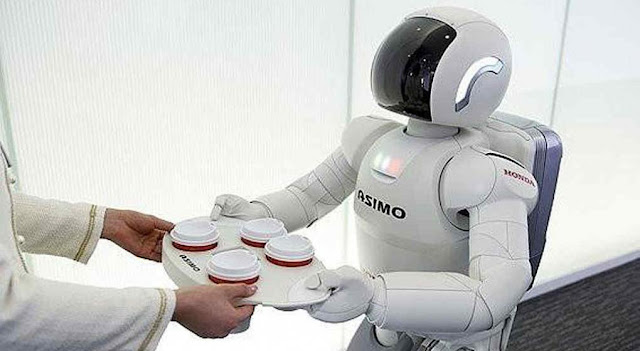 These three news caught my attention, the first of January 16, 2017 published by La Nación, talks about social inequality, a note from the NGO Oxfam; The second, a note from the World Economic Forum Annual Meeting of January 2017 and the third a note published by Clarín on 06/20/2016 on how robotics is displacing people from certain jobs. They are three separate and disconnected news ... or maybe not so much.

The gap between rich and poor has never been so great as it is today. The eight richest people on the planet own as much money as the poorest half of the world's population.

During 2016, many of us are experiencing the massification of augmented reality technologies (digital representation of the physical world) and virtual reality (immersive simulation of a real environment) with videogames such as Pokemon Go and devices such as Facebook Oculus Rift.

While the Internet is an inexhaustible source of information and training, for the poorest strata (at least in Argentina), the augmented reality only came to Facebook (many believe Face is the Internet, or better Said, reduce the Internet to Facebook). The next technology applications will leave many people jobless, replacing them with robots, programs or super applications. I recommend you to see the whole note at https://www.weforum.org/en/agenda/2017/01/las-7-tendencias-tecnologicas-del-2017/.

According to a World Bank report, workers are being speedily replaced by robots in the most routine manual tasks.

The report explains that only in Argentina 60% of jobs can be automated. It can be delayed more or less, according to the rhythm that takes the incorporation of technology. Robots can now be seen in libraries, banks, taxi companies, supermarkets and medical offices. The change will deepen in the next 15 years, according to a survey of private consulting firm Accenture.

For Guillermo R. Simari, PhD in Computer Science and Professor of Artificial Intelligence at Universidad Nacional del Sur, jobs at risk are "those that involve routine tasks that do not make use of human capacity. The tellers, the people who clean the streets, the collectiveros, will eventually go out of work because it will be safer and more efficiently made by machines. "

The new mass communication tools also remove jobs: At the beginning of 2016, the Central Bank authorized to send the card summaries by e-mail: Gratuitous shot for postmen.

The gap is not only economic, but total: cultural, educational, technological opportunities, access to health, education, food, the future ... the poorest were previously doomed to remain poor, now seem destined to Extermination by indifference: In a few years will not be necessary even for the tasks that the better prepared do not want to do, will be replaced by machines that will be more efficient, cheaper and more reliable.

I would like to give you a light of hope, telling them that this will not be the case ... but it will be, because the big economic groups manage governments and direct state policies on the benefit of the richest 10% Is not interested in the poorest 40% of the world's population.

Take every opportunity to educate yourself, to educate your children. Wake up now, get ready, before your routine manual and mechanical work does a robot.
Inequality will end up affecting society so much that the movie "The Hunger Games" will be a student picnic compared to reality. This crisis is also reflected in the Scriptures, for example when he says:

5 When the Lamb broke the third seal, I heard the third of the living creatures, crying, "Come!" I looked, and a black horse appeared! The rider had a balance in his hand. 6 And I heard a voice in the midst of the four living creatures, saying, "A pound of wheat, or three pounds of barley, for a day's wages; But do not affect the price of oil and wine. " (Revelation 6: 5-6 NIV).

Inequality will provoke the next great armed conflict:

4 And there came forth another horse, burning red. A great sword was given to the rider; Was allowed to take peace from the earth and make its inhabitants kill each other. Revelation 6.4 NIV.

And war and famine will continue:

7 When the Lamb broke the fourth seal, I heard the voice of the fourth living creature crying, "Come!" 8 I looked, and there appeared a yellow horse! The rider was called Death, and Hell [b] followed him closely. And they were given power over the fourth part of the earth, to kill by sword, famine, epidemics, and beasts of the earth. Revelation 6.7-8 NIV.

Week 70 is about to begin. The signs are everywhere, they are published in the newspapers, they advertise on the Internet, they are predicted in the movies, but most people look and smile like idiots without understanding. Wake up, you slept.