ARGENTINA WE PRAY FOR YOU. WILL IT BE PUBLIC EFFECTIVE WHAT DOES NOT WORK IN THE PRIVATE? BY FABIAN MASSA. 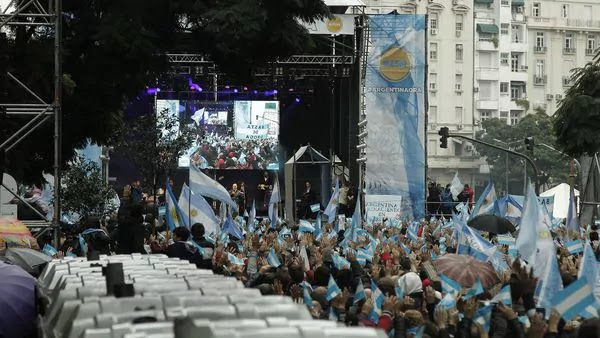 On Thursday, May 25, 2017, a huge religious gathering was held (that's exactly what it was, "Religious") called * Argentina Ora [1] * in the Obelisk, in order to ask "for the recovery of Argentina ". At the same time, for the same purpose, evangelical faithful and other Christian denominations gathered in 150 localities of the country [2].

I was reading the "Prayer Guide" and it seemed very suitable and convenient: Pray for the critical climatic situation, for the authorities, for internal peace, for a time of justice to come (in the legal, not in the Divine ), A reduction of corruption, the poor and marginalized, the youth who are aimless, the economic revival, and finally a spiritual revival.


The prayer guide is very correct, however I raised several questions:

to. The first is whether it was necessary to do so at the Obelisk. These are topics that are usually prayed in each service. Will it be more effective by making yourself seen in the Plaza?

B. The second is if this is already prayed in each congregation and does not happen within each Church, and if each of these congregations can not impact first on itself and even less on its neighborhood, is it that joining the Obelisk will happen something?

The problem is not in the action itself, nor in what was prayed but in who and how they carry out the same, the problem is in:

The "Anointed One," who distribute blessings, Declare Prosperities, Rebuke Illness and Forces of Evil, Establish the Kingdom here on Earth, but fail to make something happen in their own Churches, or in their own neighborhood, will anything happen Your Power Statements Nationwide?

Wake up guys, even if they make a National Chain and are televised internationally, it seems that their prayers do not get where they have to go, because for that it would be necessary that:

1. First, humble your "anointed ones" before God and stop prophesying according to your own heart.
2. Stop following men and focus on Scripture, seeking to hear and understand.

Week 70 is about to begin and we are still in sight.