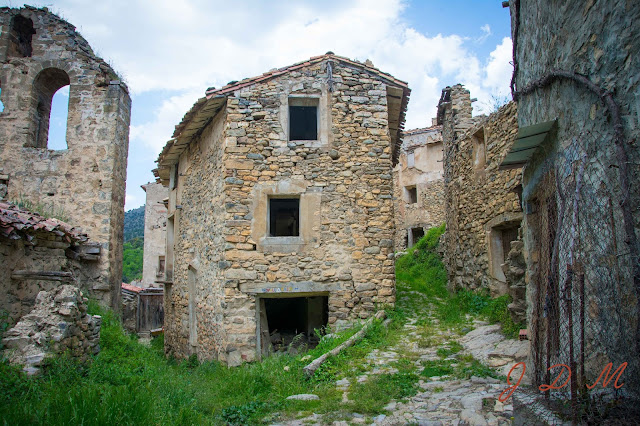 Many people die because they do not give young people a life that is worth living, so they migrate to the cities in search of an accomplishment through work, study, activity ... of life. And the old ones are left, and they are dying little by little, until the town becomes a shadow.

And why do the churches die? Recently a friend of mine who congregates with his family in a Church with a "Fundamentalist" tendency (that is, they take the Bible literally, as a book of scientific truths, although it is not) I wondered why the young people do not want to go church. The young people now go to the University and are studying the natural reality of the Cosmos according to Thought and the Scientific Method and are learning that things in reality are very different from the simplified account of the eleventh century that they received from their family , Of his pastors and of his teachers of the "Biblical School".

The Sun does not revolve around the Earth, the Universe has more than 5800 years, the Moon of Blood is not blood but a total eclipse of Moon, The Sun dressed in sackcloth is also an eclipse, the current man has between a 4 And 6% of Neanderthal genetics and therefore there was more than one species at stake. When it has been verified that the background noise of the Universe corresponds to the echo of the Big Bang ... Logically when these young people see that many of these realities are measured, weighed, checked and backed by concrete tests, they begin to distrust their teachers and Pastors and decide to leave the Church of their parents, not because they do not believe in God, but because they no longer believe in their elders or their arguments of the eleventh century.

The strategy of fundamentalists is to deny all concrete evidence that contradicts their interpretation of the Scriptures, so "to safeguard the faith," even go so far as to prohibit children and parishioners in general from reading any material that has not been " Controlled "by them.

In the post * The Mark of Truth * [2] commented:
"The Truth is identical with itself, because it is ONE, INDIVISIBLE, IMMUTABLE. And that necessarily marks the material reality in which we live. THE MARK OF TRUTH in Creation is everywhere, as the Apostle Paul explains: "Through all that God did (The Heavens and the Earth), they (the men) can see with the naked eye the invisible qualities of God: His eternal power and divine nature. So they have no excuse not to know God. "Romans 1.20 NTV.
Just as an artist's "signature" (his style, his techniques, his conception of beauty and aesthetics, harmony and balance, etc.) is present in all his work, although his signature is not included at the bottom of the work. In the same way, the "Sign of God" is also, although the created one does not have a stamped stamp that says "DONE FOR GOD".

The Truth of Reality must be seen in the Truth of Scripture, for example:

7 Then YHVH God formed man from the dust of the earth, breathed into his nostrils the breath of life and man became a living being. Gen. 2.7.

"The dust of the earth": The Hebrew text makes a play on words with the words adam, which means man, and adamá, which means arable land or soil. This highlights the close link between humanity and the earth.

Soil or "arable" soil, this is because it is rich in Humus, let's see what this is:
In general, humus [7] (from Latin humus = earth, soil) refers to the organic part of the soil and underwater sediments. This compound to which we refer, is the clay, which is formed by iron hydroxides, aluminum oxide, silica (sand compounds) and various micas, etc.

To this clay soil must be added the decomposing vegetable residues (vegetable humus), and add that resulting from the decomposition of animal origin (droppings and dead animals).

As we can see, the "ingredients" are the same as the "recipe" of humus and man:
Water, iron, aluminum, silica, phosphorus, nickel, carbon dioxide, argon, oxygen, neon, xenon, ozone, krypton, carbon monoxide, gallium, germanium, magnesium, titanium, etc.
At stellar level the elements are the same. The Word says that the Lord made all things, and so it is. That is why everything has the "seal, the style" of the Lord and we see His hand in all things, even in ourselves.

When young people begin to see that the "truths" they sold to them do not match the truth of reality, they lose confidence and leave.

The advice to the "Fundamentalists" is basically to stop being it, to be more humble and to stop thinking that "its interpretation of the truth is the Truth", especially when it does not match what is concrete. To deny reality, far from making them more pious, or of greater faith or holiness, makes them simply foolish.

Week 70 is about to begin, be humble and recognize that there are things you do not know how they work.

[1] The Big Bang theory predicts a very specific form of the spectrum of cosmic background radiation: this must be the characteristic spectrum of a body in thermodynamic equilibrium. The COBE satellite measured the spectrum of cosmic background radiation and was able to determine with unprecedented accuracy that this is exactly as the theory predicts. Http://astroverada.com/_/Main/T_cmb.html
[2] http://www.tesorosdesabiduria.com/2017/04/la-marca-de-la-verdad-by-fabian-massa.html
[3] http://www.tesorosdesabiduria.com/2017/04/la-marca-de-la-verdad-by-fabian-massa.html